10 years ago today, my first title was published!

I’ve actually been published for a decade!

It’s incredible to think about how long it’s been, and how quickly it’s gone!

On the 8th of December 2008 my first e-book – The Gift – was released into the world by Total-e-Bound Publishing (who later became Totally Bound Publishing, and split their MM titles off into Pride Publishing). 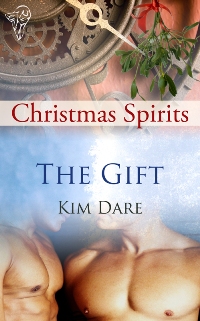 If Charles prefers leather to tinsel, that’s okay. Nicky is still sure he can teach his master to love Christmas – with the aid of a perfect gift.

Just because Charles doesn’t see any point in making a fuss about Christmas, that doesn’t mean he can’t tolerate Nicky’s passion for tinsel and holly. He’s never forbidden his pet from enjoying any of his Christmas traditions and he thinks that’s enough.

The Spirit of Christmas Past isn’t used to visiting Christmases that involve quite so much nudity, passion or kinky sex. Leading a dominant man like Charles through the Christmases isn’t easy – and keeping his eyes off the frequently naked Nicky is impossible. Still, all the spirit can do is enjoy the show – because his job is to bring lovers together and fade away inconspicuously. That’s the plan. However, if someone suddenly wants to thank him, who is he to say no?

It’s strange re-reading a book that you wrote so long ago. I know it’s far from perfect. If I was writing it now, I think I could do a better job. But, if my writing were no better now than it was then, it would mean that I’ve wasted a decade! And, if I’m honest, there’s one bit where I cry every time I re-read the story – so I’m going to hope that means I did something right in that bit of the story 🙂

It’s been a wild ten years, with over 100 titles published, from short stories to full length novels. There were years where I wrote at least two novellas a month, and years where I was too ill to write much at all.

But at the same time I think the important things have stayed the same. I still love writing the kind of books I write and believe that they are worth writing. I still love my characters and want to help them find their happy endings. I still love the readers and the writers who make up this little bit of the book-ish community. And I’m still incredibly grateful that I get to spend my time and make my living writing these books.

Huge hugs and thanks to everyone who has been with me along the way!

P.S. There wasn’t a blog post / newsletter at the start of this month because I haven’t really got a whole lot to report this month.

That’s one of the problems when you start writing a long novel. Months can go by with the only update being – yep, still working on the novel, lol.

But, for those who have asked – yes, I’m now deep into working on Bayden’s Alpha and it’s tentatively going okay so far 🙂